What some people don’t know is that there are actually many different kinds of shower heads out there. Two of the most popular types include the good old regular shower heads and rain shower heads.

So, what are these types like and what are their main pros and cons? Which one should you choose? Continue reading to find out.

A regular shower head is what you are most likely used to, that head in your shower that you can swivel around and adjust for direction, one that has a decent amount of water pressure. Regular shower heads are usually wall-mounted, right below the ceiling or close to it. This is the most common type of shower head that you will find in most places.

On the other hand, we have the rain shower head, which as you might be able to gather from the name of it, is designed to make it feel like you are being rained on. Rain shower heads are usually very large, what most people would consider oversized, as they can be anywhere from 8 to 14 inches in diameter and in some cases even larger.

Some rain shower heads may be wall-mounted, while others may be ceiling-mounted, and some are adjustable for angle and position, whereas some are not. Moreover, some configurations allow for multiple rain shower heads spread out across the ceiling and/or walls of your shower.

The Pros and Cons of Rain Shower Heads

One reason why many people choose rain shower heads is that they look very nice.

If you want to create a modern, sleek, and stylish bathroom that looks like it is meant for royalty, there is not much better than a rain shower head. These things come in all sorts of shapes, sizes, and configurations, with the newest ones resembling space-age technology. They just look super cool.

Another advantage that you get with a rain shower head is that they generally cover all of your body with water at once. This is unlike regular or even handheld shower heads, because both of those only cover a limited amount of your body at once.

Rain shower heads are so large that if you stand right under it, and moreover if you have multiple ones raining down on you from various directions, chances are that there won’t be a single inch of your body that isn’t being cascaded with water. In other words, it’s pretty efficient, at least in this sense, and it does feel quite nice too.

Advantage #3: It is Very Tranquil

The next reason why many people choose to go for rain shower heads is due to the relaxing and tranquil effect that they have. Although not everybody will feel this way, many people enjoy standing in the rain.

There is just something about having a large quantity of water calmly rain down on you that feels natural and relaxing. Some people may even feel closer to nature when using a rain shower head. The bottom line is that it’s a great way to wind down after a stressful day.

Advantage #4: They Tend to be Easy to Install

For the most part, unless you go for some super fancy setup that involves a myriad of shower heads raining down on you from all angles, these rain shower heads tend to be fairly simple to install.

Unless you get a really complicated one, chances are that you can install it yourself without a problem.

Advantage #5: Many Are Adjustable

Although not all rain shower heads are adjustable for position, height, angle, and even the amount of water flow and the diameter at which water is flowing, many of the newer models do allow for all or a combination of these adjustable features.

Disadvantage #1: They Can Lack Water Pressure

A big disadvantage with rain shower heads is that they usually have limited water pressure. The reason for this is because they are so wide, sometimes 14 inches or more in diameter. The larger they are, the wider they are, and the more holes water is flowing out of, the less water pressure there will be. It’s simple math and physics.

The larger the area that the water occupies, the lower the pressure will be. Therefore, if you are looking for a quick shower with plenty of pressure to wash the shampoo out of your hair in a couple of minutes, a rain shower head might not be the way to go. On that same note, this often results in longer shower times and actually using more water.

Disadvantage #2: Your Plumbing Might Not Be Up to the Task

Related to the previous point, if you have small pipes, such as 1-inch pipes, they might just not be large enough to supply the rain shower head with the water volume and pressure that you want.

Disadvantage #3: They Are Expensive

The other main disadvantage here is quite simply that rain shower heads are not cheap.

The Pros and Cons of Regular Shower Heads

Now, let’s take a look at the pros and cons of regular shower heads.

The main benefit that you get with regular shower heads is that due to their smaller size, there is more water volume flowing through a smaller space, with the result being more water pressure. You can even get high flower shower heads designed to increase the pressure even more.

The result here is plenty of water pressure to blast away hidden dirt and shampoo alike.

Due to the fact that regular shower heads have great pressure, they allow for quick two-minute showers.

You get in, you get wet, you lather up, and then use that water pressure to blast soap and dirt down the drain in record time.

Advantage #3: They Are Easy to Find

Regular shower heads, because they are so common, can be found in virtually every hardware, appliance, and bathroom store around, not to mention online too.

That cannot be said about rain shower heads.

Advantage #4: They Are Easy to Install

Regular shower heads use regular size fittings and installing them often involves no more than screwing them onto the existing pipe coming out of the wall.

Advantage #5: They Are Cost-Effective

You can find a decent shower head for something like 20 dollars without any problem.

Most modern shower heads also allow you to adjust the type of water flow to make the cone of water wider or narrower, and many have cool pulsating or massage modes too. 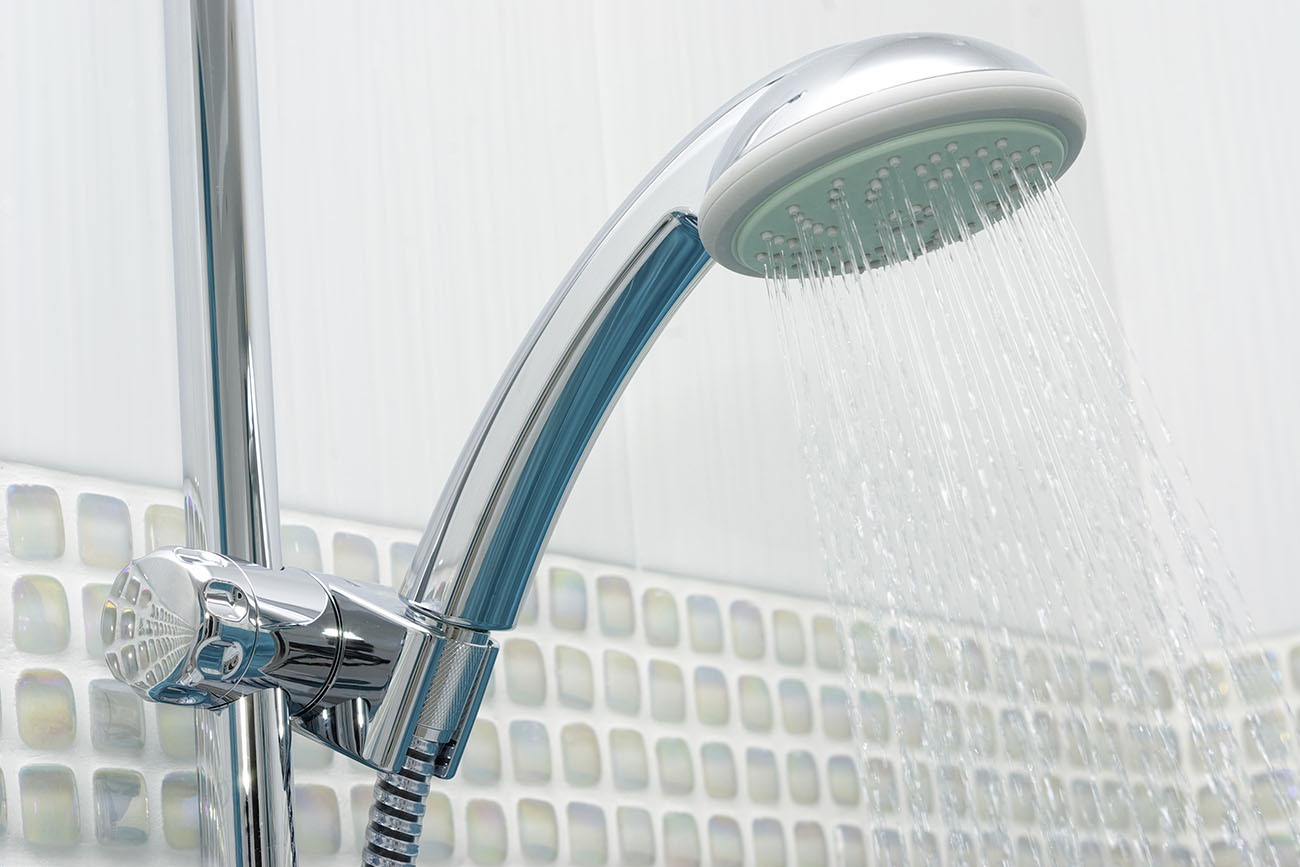 Disadvantage #1: Not as Relaxing

The clear disadvantage with regular shower heads, particularly when compared to rain shower heads, is that they just are not all that relaxing.

Sure, they might be efficient, but they don’t make it feel like you are standing in a tropical rainstorm, that much is for sure.

The second disadvantage that comes with regular shower heads is that they do not cover your whole body with water at once.

You have to direct the water at a certain angle or stand a certain way to get the water to where you want it to go. For instance, if you are standing with your back to the shower head, that’s the only part that’s going to get wet.

If you plan on having a very relaxing and serene experience in a modern-looking shower, your plumbing is up for it, you have some money to spend, and don’t mind not having firehose-like water pressure, then a rain shower head is recommended. However, if you live somewhere with limited water or you just don’t want to waste water, and you want a fast and efficient shower, all for a low cost, then stick with regular shower heads. In case you go with the handheld variety, you can see my recommendations here.

That said, you can also opt for a rain and handheld shower combo to get the benefits of both at the same time.

Whether you choose a regular shower head or a rain shower head, the main recommendation we will leave you with is to not rush into a purchase.

Do some more research, compile a list of the best products, and then go from there.