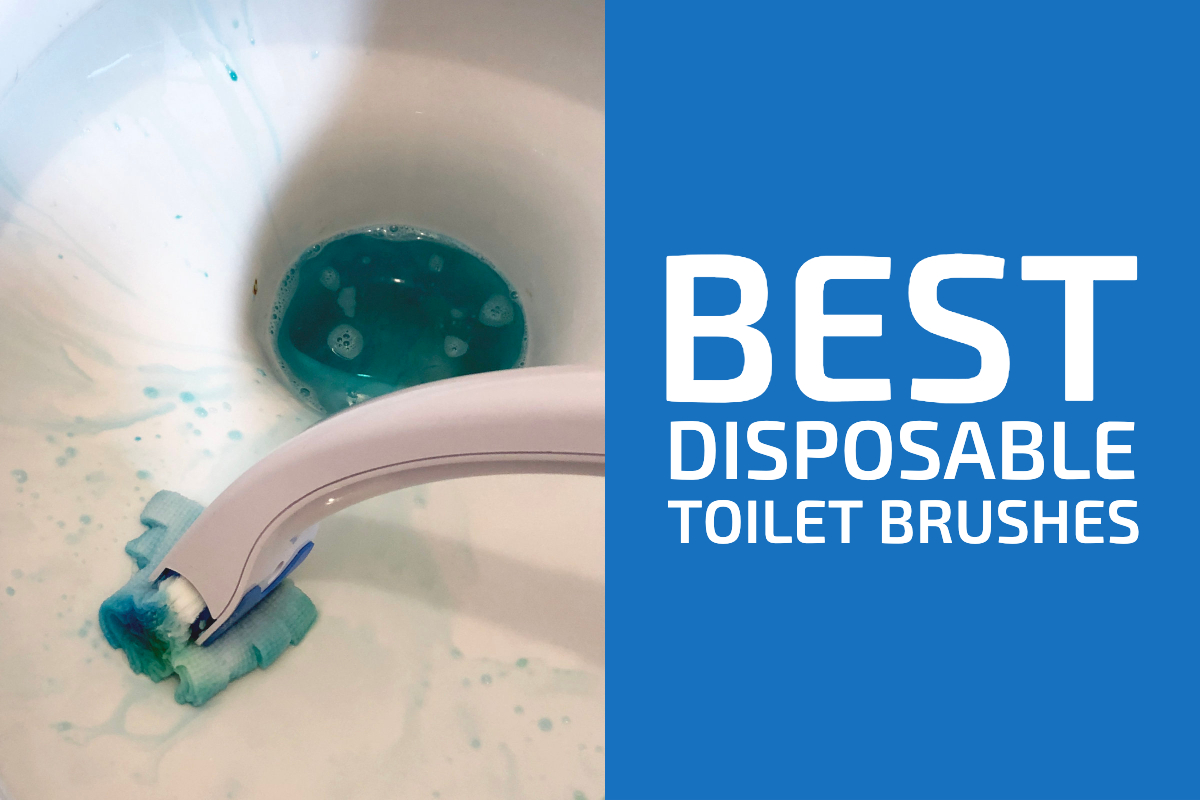 Even though it’s something that has to get done, if you’re anything like me, you hate cleaning. Especially so when the toilet bowl is concerned.

For ages, the default go-to tool for cleaning toilets has been the toilet brush. A plastic wand with a brush at its end that gets filled with germs over time. A tool that is used for cleaning but also has to be cleaned itself.

While it’s still very popular and used in most households, a more hygienic alternative – the disposable toilet brush – has been growing in popularity recently.

In this article, I’ll take a look at what I think are the four best disposable toilet brushes, as well as at whether the classic toilet brush really is as unhygienic as it seems to be.

Before continuing, though, here’s my top pick.

The only product with flushable cleaning pads. “Heavy duty” pads available in addition to standard ones.

The products below are in no particular order – they are all very similar and each has their own advantages and disadvantages. As such, you have to weigh those and choose the one that suits your needs the best.

Being one of the most popular disposable toilet brushes, you can’t go wrong with the Scrubbing Bubbles Fresh Brush.

This product’s starter kit includes a 19-inch wand, a stand, and four citrus-scented pads. Each of the pads is single-use and flushable. In fact, this is the only product that offers flushable pads – others have to be thrown into the trash. Once you run out of the four pads provided in the starter kit, you can easily get additional pads (they come in packs of 10 and 20).

In addition to the standard pads, “heavy duty” refills for a more thorough cleaning that come in packs of 8 pads are available as well. Keep in mind, though, that unlike the regular pads, the “heavy-duty” ones cannot be flushed as they feature a plastic part.

The one downside of the Fresh Brush is that its refills don’t come in an unscented version or in other scents than citrus.

I should also note that this is my favorite product from this list and also the one I use at home. It works great in combination with Scrubbing Bubbles gel toilet cleaning stamps.

The Scotch-Brite disposable toilet scrubber is another alternative to the classic toilet brush.

Similarly to the Scrubbing Bubbles product, it is available as a starter kit containing a handle, a storage caddy, and five disposable refills. The refills can, of course, also be bought separately in packs of ten.

Each of the refills is infused with a cleaning solution that helps make the tool effective. Additionally, they are shaped in a way that will let you easily scrub under the toilet rim and in other hard-to-access spots.

Unfortunately, though, the refills are not flushable as they contain a plastic locking mechanism. Many users also reported preferring Scotch-Brite’s older, now-discontinued design.

Coming with its starter kit are a wand, a storage caddy, and six refill heads. The refills can be bought in packs of 30 and come in both an unscented version and a “Rainforest Rush” scented version.

The shape of the heads allows them to easily clean large surfaces with their flat part as well as harder-to-access places with their thinner side. They are pre-loaded with Clorox cleaner and can kill 99.9% of germs like staphylococcus aureus, salmonella enterica, rhinovirus type 37, and influenza A. Unfortunately, they cannot be flushed after use and have to be disposed of as regular thrash instead.

One more thing worth noting about the Clorox ToiletWand is that its storage caddy is not only designed to hold the handle, but also the refills.

The last disposable toilet brush I am going to introduce in this article is the Mr. Clean Magic Eraser toilet scrubber. Being made by the well-known cleaning goods brand, you cannot go wrong by picking this one either.

Its starter kit includes a handle, a storage caddy, and six refills. Just like with the previous item, the storage caddy that comes with this toilet scrubber not only holds the handle itself but also the refills.

The refills are a combination of Magic Eraser which makes sure your toilet bowl gets clean and of Febreze which adds a pleasant scent for freshness. They are sold in packs of ten and are not flushable.

In terms of design, this is my favorite product.

The Pros and Cons of Disposable Toilet Brushes

As mentioned in the introduction, even though the use of disposable toilet brushes is on the rise, classic ones are still used more widely. And, understandably so. While personally, I prefer disposable ones, they have both their advantages and disadvantages.

Let’s start with the advantages.

First, disposable toilet brushes are more hygienic and sanitary. Thanks to the fact that rather than having a brush that’s reused over and over again, these tools have single-use refills, they don’t accumulate germs the way traditional brushes might. And, more importantly, you don’t have to keep the part of the brush that gets into contact with the dirty toilet bowl in your house.

Second, they are also easy to use. Regardless of which model from the ones above you will pick, all you will have to do is attach the cleaning pad, clean your toilet like you normally would, and then press a button to release the used pad either into the toilet (in case of the flushable ones) or into your trashcan.

Now, let’s take a look at the disadvantages.

First, they’re disposable. While this is their advantage, it’s also a disadvantage. Because you will need to keep buying the refills, over time, they might get more pricey than a standard brush. That said, you will also have to buy a new brush every now and then, and so, this is not as much of a dealbreaker as it might seem. They also generate more trash than a regular brush – but then again, the plastic handle is used over and over again, so the environmental footprint is not as serious as it might seem at first.

I have yet to find a person that enjoys cleaning a toilet. In fact, many people – including me – hate it.

That said, it is much more manageable to do so using one of the disposable toilet brushes than using a classic one. In addition to being easier to use since they come pre-loaded with a cleaning solution, they are also more hygienic and sanitary.

While there are a couple of different such products on the market, the one that I recommend and use personally is the Scrubbing Bubbles Fresh Brush. One of its biggest advantages is the fact that its pads are flushable – making it even more convenient to use than the other products on the list above.