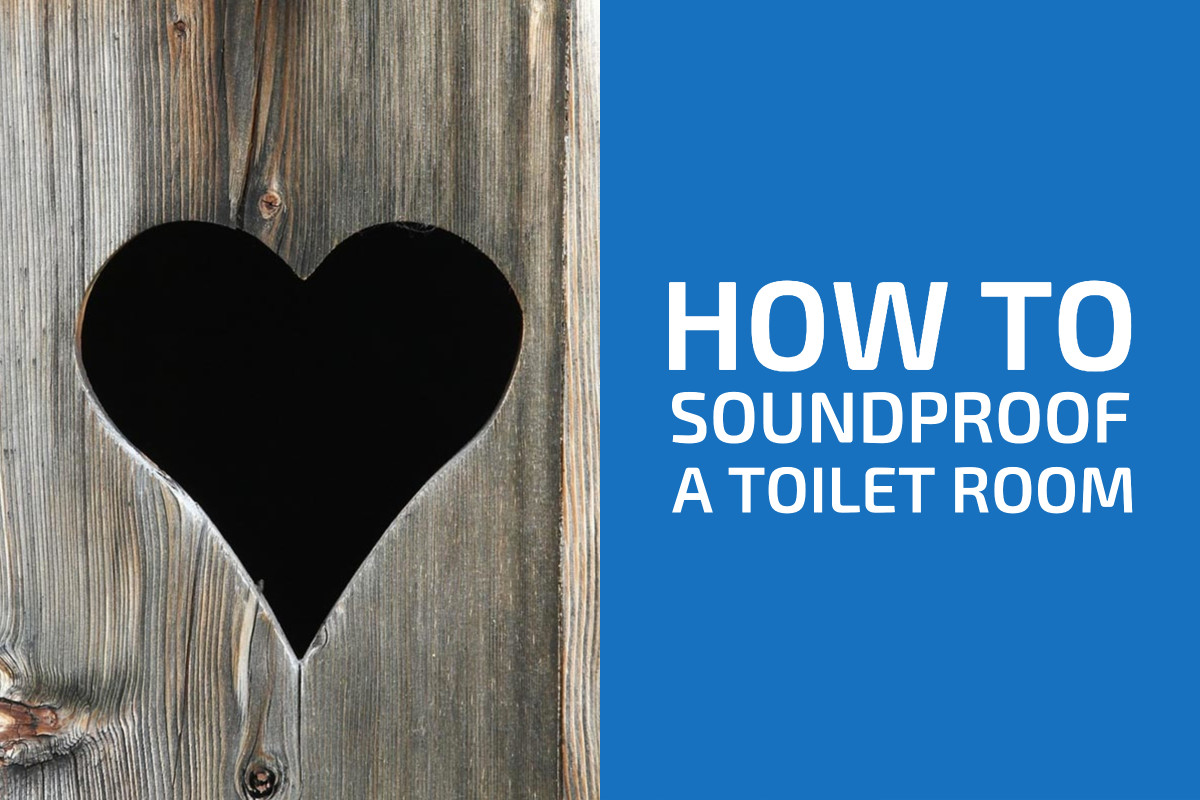 You live in a small apartment, have guests over, and you need to…

You go to the toilet and for a brief moment, it feels like your apartment has turned into a war zone. You wish you could just stay in the toilet room and never have to look into your guests’ eyes again.

Or, you wish your toilet room was soundproof.

If the second is the case, then I have good news to tell you.

Soundproofing a toilet room is something that a lot of people consider and actually do, and you can do so too.  In fact, it’s something that can be done fairly simply by yourself in an afternoon for as little as $100.

In this article, I will look at why you should soundproof your toilet (as if the story above wasn’t enough), as well as how to do it to varying degrees of perfectionism.

So let’s jump right in.

Why should you soundproof your toilet room?

While your house’s main door is likely strong and blocks noise relatively well, that cannot be said about most of the doors inside houses and apartments separating the various rooms – including the toilet room.

Yet, whether it is the “poo and fart” sounds mentioned in the introduction or the loud sounds of toilet flushes, you likely consider them to be a noise – a sound that you would prefer not to hear.

As if it were not annoying enough when you are at home with your family, it gets even worse with guests at your house.

You sure don’t want them to hear your “toilet noises,” and neither do they want you to hear theirs.

And, while your guests will likely not know that you soundproofed your toilet, there is another way you can have your guests feel in the bathroom as if they were alone at their home.

So, let’s take a look at that, as well as the ways to actually soundproof your toilet room.

How to soundproof your toilet room

Below, I will take you through a couple of steps aimed at soundproofing your toilet room, from the easiest ones to slightly more time-consuming ones.

As mentioned above, the toilet door is where most of the noise from your toilet leaks through to the rest of your house or apartment. As such, you will want to focus on it first.

The first two and easiest steps you can take in soundproofing your toilet door is to block the gaps between the door frame and the door, as well as the door and the floor.

With the door frame sealed, the next step is to seal the gap between the door and the floor. To do so, simply get a cheap door draft stopper and stick it to the bottom of the door. As an added bonus, it will also prevent insects from crawling in and out of your toilet room.

While the above two steps should be sufficient to dampen the noises coming out of your bathroom significantly, if you want to take it a step further, you can also soundproof the door itself.

Here, the easiest but the most pricey way is to simply replace the door. While most interior doors including toilet doors are hollow-core, you could exchange yours for solid-core door which block sounds better. You can either get them at your local hardware store or browse through Amazon’s selection.

Alternatively, you can go the DIY route which would involve your existing hollow-core door soundproofed with sound absorption panels. In that case, you would either have to learn to live with ugly toilet door (at least on the inside) or get creative in covering those panels with something to make them look nice.

Of course, you could plaster them with sound absorption panels that I talked about above, but once again, it would make your toilet look ugly. And, would likely be beyond what you could creatively cover up.

As such, if you really can’t live without soundproofing the walls, you should consider drywalling.

The process basically involves installing an additional wall and adding sound isolation clips and sound channels between the actual wall and the new drywall.

Since it’s quite an extensive project, rather than trying to do it on your own, I recommend that you call up a professional to do it for you.

Making the toilet itself quieter

While doing the below will not prevent your farts from getting out of the toilet room, it will definitely make your toilet quieter overall.

There are basically two parts you can make quieter – the tank (and flush) and the seat and seat cover.

To do the first one, simply use a tape similar to the one used on the door above but narrower (such as this one from Amazon), and stick it around the edges of either the tank’s lid or the tank itself. Just make sure you dry and clean the place where you stick it before doing so.

As for making the seat and seat cover quieter, simply stick small noise dampening bumpers on the bottom side of the seat cover and seat itself.

If your main goal is to make your guests feel comfortable “doing their business” in your toilet room, then rather than soundproofing – which the guests might not know about – adding a “counter-noise” might be the better way.

What I mean by that is that you add some sort of device that will produce noise that will overpower the “sounds of your guest’s business.”

Similar to what many Japanese washlets (toilets with bidet seat) have. With those, you just press a musical note icon, and voila! The toilet starts playing a melody to “block” your toilet noise.

While you could certainly get a toilet seat that offers such a functionality (such as this one), if noise generation is all you are after, there are much cheaper ways to achieve the same result.

One way to do so would be by installing a loud extractor fan that can either be switched on with a separate switch or that automatically switches on when the toilet room light is switched on.

If you would prefer something not requiring installation, you could simply get a small radio like this one and keep it in the toilet.

Soundproofing a toilet can definitely be worth it for both your and your guests’ peace of mind.

While there are several ways to make your toilet room appear quieter from the outside, the simplest and most effective place to start with is the toilet door which leaks most of the sounds.

The two things to start with first when soundproofing your door should be sticking sound dampening tape around your door frame and installing a door draft stopper.

Only once you do these two and still find the noise levels outside your toilet to be unacceptable do I recommend looking at further soundproofing.