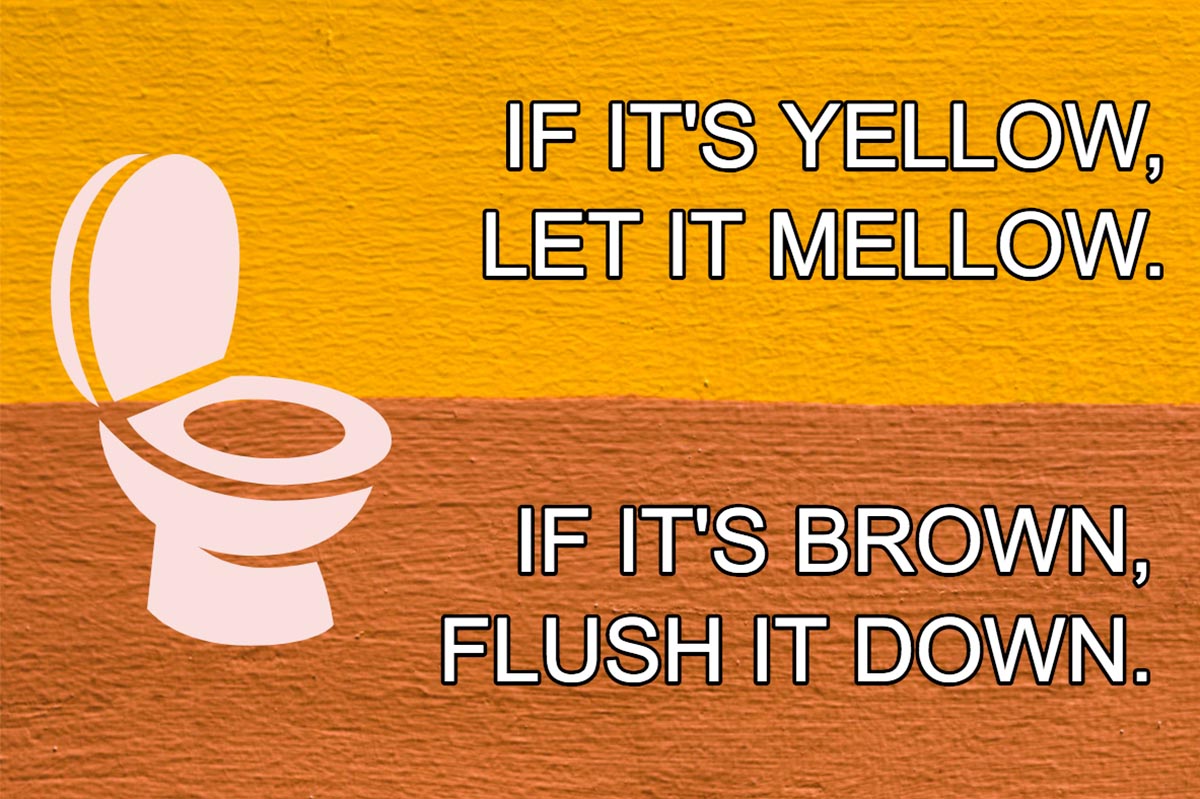 If it’s yellow, let it mellow. If it’s brown, flush it down.

You probably heard about this toilet flushing strategy before. Sometimes it’s also referred to as “selective flushing,” or even “in the land of sun and fun, we do not flush for number one.”

Just as you would have guessed by the two colors that play part in the strategy, it’s related to the usage of a toilet. More specifically, related to peeing and pooping.

It’s basically a toilet usage guideline saying that pee should not be flushed.

Before you completely disregard the strategy and close this window, give it at least a thought, though… Or, even finish reading this article and then form your opinion about whether it’s a guideline worth following or not.

Disadvantages of Letting the Yellow Mellow

While one of your arguments against the “if it’s yellow, let it mellow” policy might be the fact that it will spread bacteria around your bathroom, think about it again.

Generally, the bacteria is spread when the flush itself causes particles to sprinkle around the room. From that point of view, not flushing is, in fact, more hygienic than flushing.

The other disadvantage is, of course, the smell of urine potentially spreading around your house. And, that is certainly a valid concern. That said, a healthy adult’s urine should in most cases be without any significant smell.

Still, it can be concerning – especially during the hot summer months.

Finally, the biggest disadvantage, at least in my opinion, is the fact that in a way following the guideline is gross. At least based on the standards we are used to.

After all, how would you feel if you went to the restroom in your friend’s house during a nice dinner and found “yellow mellowing” in the bowl?

Advantages of Letting the Yellow Mellow

Now that we’ve established the downsides of selective flushing, let’s look at the upside that will, perhaps, make you try this method at least for a limited period of time – be it in winter or at times when you don’t expect any guests.

First of all, if you are environmentally conscious, the most likely appeal of the “if it’s yellow let it mellow” strategy will be its (however small) positive impact on the environment.

After all, the amount of water you will waste will go down a fair bit.

Second, as a result of that, you will of course also save some money on your water bill.

How Much Money Can You Save with Selective Flushing?

As for the exact amount of money you will save by “letting the yellow mellow and only flushing the brown,” that will depend on where you are located and what kind of toilet you have.

Let’s take a look at a couple of examples assuming that the average person urinates five times a day and defecates once a day and using the data from my post about the cost of a toilet flush.

So, let’s say you have a decades-old toilet that uses 3.5 gallons of water per flush which comes down to about 2.8 cents per flush based on the average cost of water and wastewater in the United States.

In that case, flushing six times a day will 16.8 cents. On a yearly basis, that’s about 61 dollars compared to just 10 dollars if only flushing the toilet after “number two.”

If you are a four-member family, that accounts for about a 200-dollar saving on an annual basis.

Now, let’s look at the more common toilet meeting current standards of using (a maximum of) 1.6 gallons per flush. In that case, a single flush costs you just 1.3 cents and six flushes cost you 7.8 cents.

With that water usage, you spend about 28 dollars per person on flushing toilet. For comparison, if you let the yellow mellow and flush down only the brown, it will cost you less than five dollars to do so.

In terms of savings, it comes down to about 23 dollars per person per year or about 90 dollars per four-member family.

Finally, let’s take a look at a WaterSense certified toilet that uses just 1.28 gallons of water per flush. In that case, given that the average cost per flush comes down to roughly one cent, the calculations become very easy.

In other words, just 3.65 dollars per year per person if you only flush after you poo as opposed to a bit more than 21 dollars if you flush after each of your toilet visits.

While the savings are far from being significant on an absolute basis, taken as a percentage of your water bill caused by toilet flushing, they are major. And, even on absolute terms, they are worth noting in case you have an old toilet.

So, what is the final decision on the matter then?

If you do not find the guideline gross, then, by all means, go for it.

Especially if you are a three or four-member family, you will still be flushing the toilet a couple of times a day, preventing any bad smell from accumulating. And, even if you are a single person, consider following the strategy in winter or when you do not expect guests.

It will not only help your budget a little, but also the environment.

However, as for myself, I will continue flushing the toilet after each visit.

If that’s the case with you as well, you can consider cutting your water usage by getting a new toilet.

Especially if you have one that’s 30 or 40 years old, by getting a 1.6 GPF or 1.28 GPF toilet, you will be able to pay back the replacement costs within a year or two.