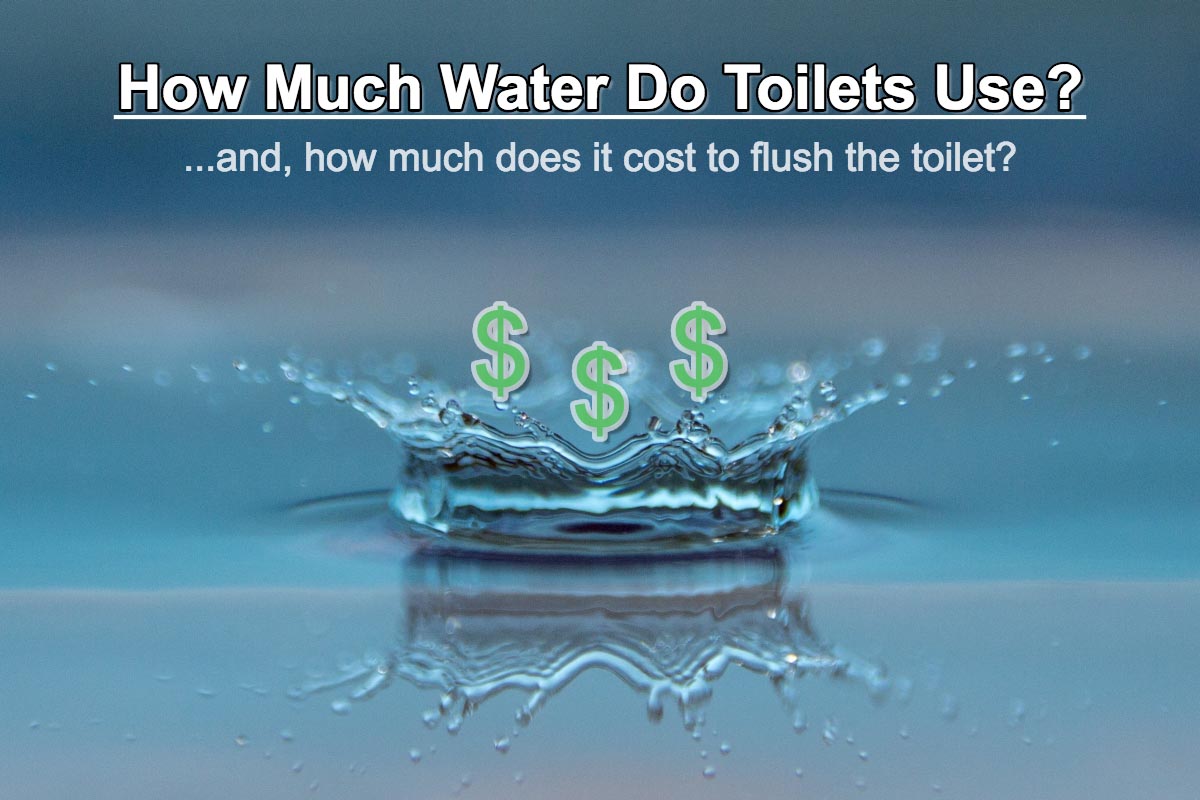 All of us use a toilet every day, but how many of us know how much water is used with each flush?

And, how much each flush costs us?

If you were wondering about that, you are in the right place.

All toilets currently manufactured or sold in the United States are legally allowed to use a maximum of 1.6 gallons of water per flush. The cost depends on where you live, but on average is around 1.3 cents per such a flush.

That doesn’t mean that the above applies to all the toilets out there, though. For example, toilets from reputable brands are generally more efficient than those made by lesser-known brands.

In the article below, I’ll take a look at the details of how much water toilets consume as well as how many dollars that translates into per flush.

How much water do toilets use?

As mentioned above, all the toilets that currently get manufactured or sold in the United States are allowed to use a maximum of 1.6 gallons per flush. That is because of a federal law aimed at conserving water that came into effect in 1994.

That said, not all toilets use that little – or that much – water.

First of all, if you live in an old house or apartment built before 1992 when the above law was enacted, chances are your toilet uses way more than 1.6 gallons per water.

On the other end of the spectrum are WaterSense certified toilets that are at least 20% more efficient than the federal maximum of 1.6 gallons per flush. In other words, those toilets use an average of 1.28 gallons (or less) per flush.

What are the costs involved in flushing a toilet?

When thinking about how much a toilet flush costs, it’s easy to look at the cost of tap water and multiply it by the amount of water your toilet uses. While that is certainly one part of the cost, there is another significant part – wastewater.

Every time you flush a toilet, you not only spend a certain amount of water, but you also send (roughly) the same amount of water down the sewage pipes.

According to the U.S. Department of Energy, the price of both water and waterwaste has been steadily increasing over the last couple of years reaching the following prices on average in 2016:

Keep in mind, though, that the actual cost you will pay for either of those will depend on which municipality you live in. Also, you might find it interesting that “throwing” wastewater away is more expensive than actually buying clean tap water.

How much does it cost to flush a toilet?

Now that you know what the costs involved in flushing a toilet are, let’s take a look at how much each flush is actually costing you.

As mentioned towards the beginning of this article, while the maximum amount of water usage per flush for toilets made or sold in the United States after 1994 is 1.6 gallons, there are toilets with several GPFs (gallons per flush) out there.

The table below summarizes how much flushing each of those toilets would cost based on the average prices of water and wastewater mentioned in the previous section.

As such, assuming you visit the toilet six times a day, the amount you spend on flushing your waste each year will range anywhere between about $140 on the higher end (if you have a really old house and toilet) and about $20 on the lower end if you have a WaterSense certified high-efficiency toilet.

Depending on when your toilet was manufactured, it can use anywhere between 8 and 1.28 gallons per flush. However, all toilets made in and after 1994 are in the 1.6 and less range.

While I will take a look at how much money you can save by getting yourself a high-efficiency toilet in greater detail in a separate article, I will mention one thing here.

If you have a toilet from the 1970s or 1980s, go get yourself a new toilet – it will pay for itself in almost no time. And, it will help save the environment.