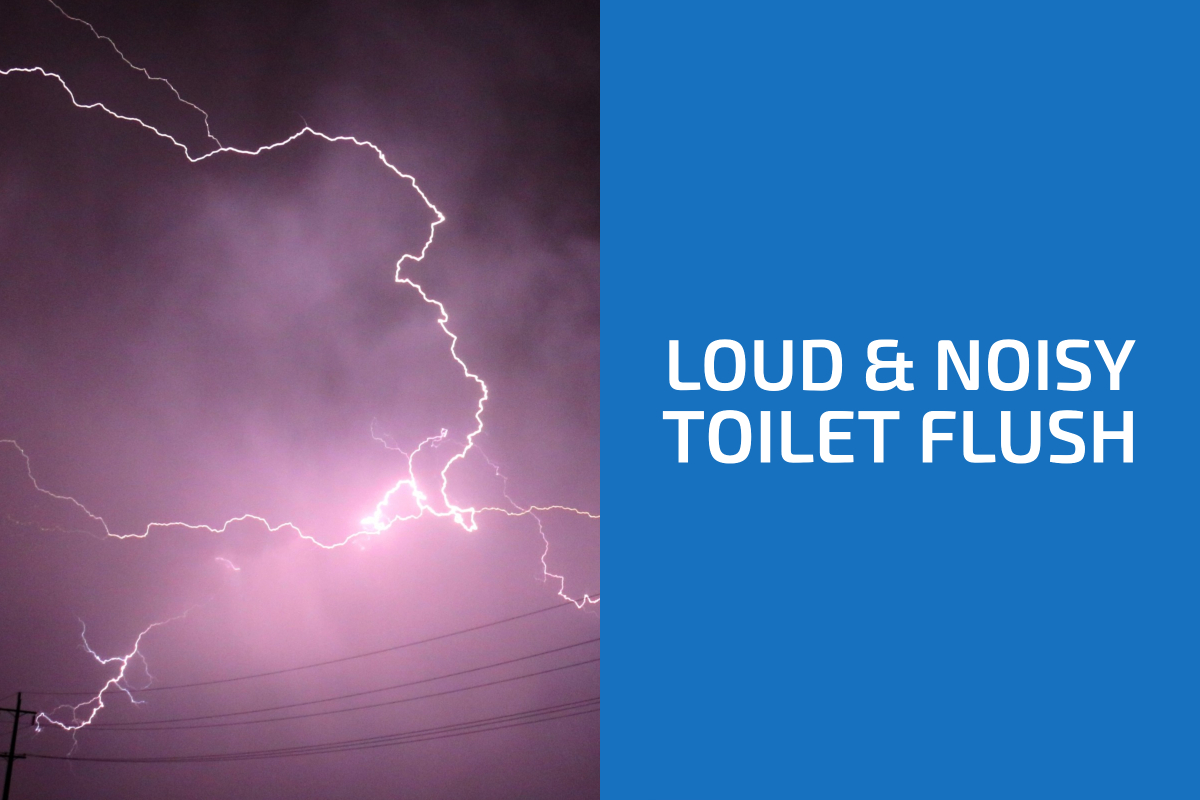 That said, it is not uncommon for toilets – especially older ones – to make sounds when they are flushed that they shouldn’t.

You can certainly minimize the impact of that (i.e. avoid your wife or children getting mad when you flush in the middle of the night) by soundproofing your toilet room. That does not solve the root of the problem, though, which might not only be annoying but also causing your toilet to use more water than it should.

Below, I’ll take a look at five of the common causes of noisy flushes as well as at how to solve them.

One of the most common causes of a loud flush is when the water that is being refilled into the tank after your flush sprays straight onto the overflow pipe or the tank.

In other words, rather than the flush itself being the problem, it’s the angle at which the water is entering the pipe or tank that is the problem.

To fix it, simply tilt the adapter through which the refill water is flowing to have it hit the pipe or tank at an angle rather than straight. That way, the refilling process should be much quieter.

Another common problem you might encounter after a flush is the “water hammer” that causes loud banging noise to come from your walls after a flush. That’s caused by the change in pressure which inevitably happens after your toilet valve opens and then suddenly closes.

To prevent that, T-shaped air chambers serving as shock absorbers – i.e. preventing the water from “hammering” – are generally installed in pipes. Those can, however, lose the air inside them.

If you are encountering this problem, you can – of course – call a plumber.

However, before doing so and committing a lot of money, you may want to try to drain your plumbing: shut off your water supply, open all faucets and flush all toilets, and then turn the water on again. In most cases, this should solve the problem.

While not that common, every now and then, your toilet will make unwanted sounds when flushing due to the water supply being too low. That’s usually caused by the shut-off being in the wrong position – perhaps after your kids tinkered with it.

The solution is simple: just turn the nob counterclockwise to increase the water flow, the same as you would do with a normal faucet.

While similar to the previous reason, rather than being caused by the nob being in the wrong position, the cause is debris in the valve.

To solve this, you will want to turn water supply to the toilet off and flush whatever water is left in the tank. Then, you will need to open the tank, lift the float cup and remove the valve system from the rest of the toilet.

Disassemble the system to the maximum possible extent and wash all the parts thoroughly. Put it all back together, restart the water supply and test.

If it doesn’t solve the problem, consider replacing the system or calling a plumber.

There are quite a few seals inside a toilet that are keeping water from leaking. However, they should not be overtightened and should have some flexibility – this not only prevents them from breaking and wearing down quickly but also prevents the toilet from making a loud noise when flushed.

Even if installed correctly, however, the seals can become stiff over time as debris accumulates in and around them.

As such, if none of the four things I talk about above seem to be the cause of your toilet noises, then you will want to check the seals. The process you should follow is similar as in the previous point – except that you will be focusing on the seals between the parts rather than the solid parts of the mechanism.

Having your toilet make loud noises when flushing can be unpleasant. Not only that, but it can also cause inconvenience to your family members or even your neighbors. As such, it’s important to figure out the source of the problem and fix it as soon as possible.

Especially in the case of water hammer and stiff seals in which case, prolonged usage can cause more serious problems.

While most of the problems should be solvable using the methods above, if none of them works – or if you don’t think you are handy enough to even attempt the fixes – you should call your plumber as soon as possible.